Vote ‘yes’ to ‘give women a choice,’ anonymous text begs Kansas voters—but pro-choice vote is ‘no’ 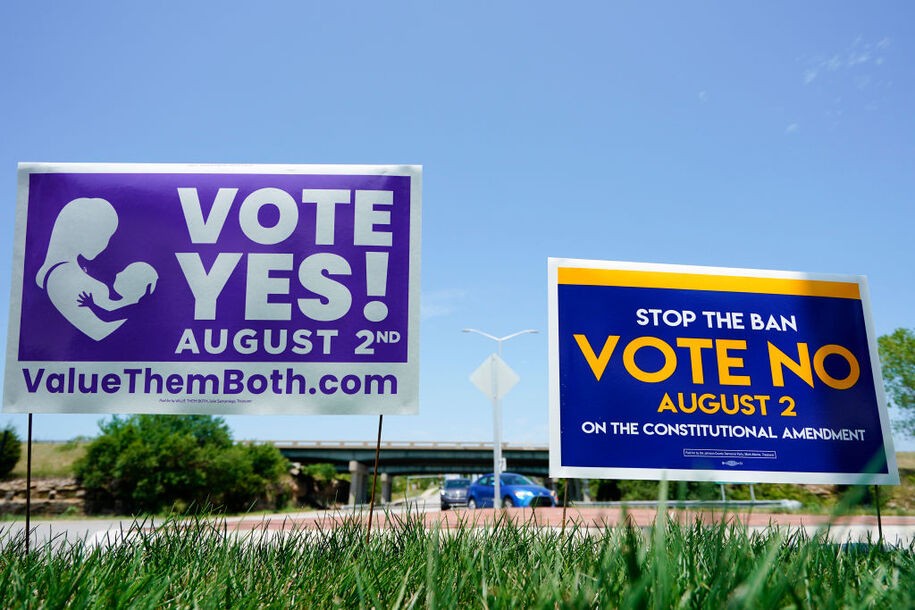 Why are we not surprised that some anonymous anti-choice group sent out a confusing text to voters in Kansas to get them to vote “yes” on a measure that, if passed, would rewrite the Kansas state constitution to make abortion illegal? This comes as Kansans face one of the most important votes in the nation today—the first reproductive rights vote since the Supreme Court overturned Roe v. Wade in June.

The text read: “Women in KS are losing their choice on reproductive rights. Voting YES on the amendment will give women a choice. Vote YES to protect women’s health.”

According to The Kansas City Star, the message was sent out across the state, presumably to thousands of voters.

Currently, abortion is legal in Kansas up to 22 weeks’ gestation—one of the only states in the region where that is still the case. In 2019, the Kansas Supreme Court ruled that bodily autonomy extended to abortion rights.

According to the ballot’s language, a “yes” vote on the Value Them Both amendment would mean:

“Regulation of abortion. Because Kansans value both women and children, the constitution of the state of Kansas does not require government funding of abortion and does not create or secure a right to abortion. To the extent permitted by the constitution of the United States, the people, through their elected state representatives and state senators, may pass laws regarding abortion, including, but not limited to, laws that account for circumstances of pregnancy resulting from rape or incest, or circumstances of necessity to save the life of the mother.”

And despite what many Kansas lawmakers have said, a “yes” vote would ban abortion.

On the other hand, a “no” vote would protect a pregnant person’s right to an abortion, and the state’s current constitution would not change—keeping abortion legal in the state, despite the fall of Roe.

One voter to receive the misleading text was former Democratic Gov. Kathleen Sebelius. In a statement sent to the Star on Monday, Sebelius said:

The Star reports that none of the state’s significant anti-abortion groups have admitted to sending the text. President of Operation Rescue, Troy Newman, alleged that “There’s a lot of people trying to confuse people on both sides, I guess.”

Historically, controversial ballot measures have been written to confuse. Remember California Proposition 8? Informally known as Prop 8, the bill was intended to ban same-sex marriage. But it was written so that a “yes” vote supported marriage solely between a man and a woman, while a “no” vote opposed the amendment that would define marriage as one man and one woman. So voting “yes” appeared to the casual follower of news to mean “yes, I support same-sex marriage.” A “Vote NO on H8” campaign had to be pushed to clarify the misleading language for voters who wanted marriage equality in the state.

As for the Kansas vote today, the misleading text messages do not violate the state’s campaign laws, but they do baffle voters.

Cindy Novelo, 64, called the texts “shameful,” and she reported to her local election office and the American Civil Liberties Union. “It was so clear. It was very clear, and people are looking for clarity. That it was so clear and completely false was just over the top,” she told The Star.

Abortion rights, gun safety, and the our planet are all at stake in this election. We must persuade Democratic voters to turn out in November. Click here to volunteer with Vote Forward and write personalized letters to targeted voters on your own schedule from the comfort of your own home, without ever having to talk to anyone.