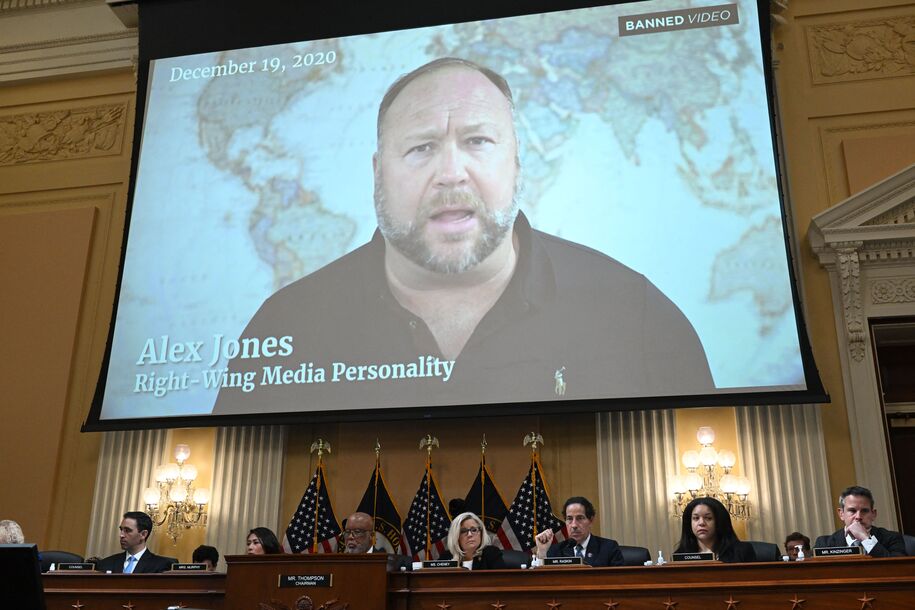 Two years of text messages on conspiracy theorist Alex Jones’ phone are expected to make their way to the Jan. 6 committee soon, according to an attorney representing the parents of a child slain in the Sandy Hook school shooting.

Mark Bankston, the attorney representing the parents in a defamation case against Jones, dropped a bombshell in a Texas court first on Wednesday when he announced that Jones’ attorney had mistakenly sent him a backlog of messages belonging to the InfoWars host.

On Thursday, Jones’ attorney, Andino Reynal, tried to have the judge declare a mistrial because of this without success. Reynal claimed the records should have been returned since he sent them with a follow-up message asking Bankston to simply “please disregard.”

But that request was not legally binding, the Sandy Hook attorney argued in court Thursday, because Reynal never followed up with a more formal privilege claim as required under state laws governing evidence.

RELATED STORY: Alex Jones sideswiped by exposure of his own texts in Sandy Hook trial

The blunder was heard ‘round the world, and its reverberations were quickly seized on by law enforcement agencies and other interested parties. That included the Jan. 6 committee, Bankston said.

A spokesperson for the committee did not immediately return a request for comment Thursday. Nor did Bankston.

Some medical records mixed in with other documents found on Jones’ phone will be parsed out, but as Bankston told the judge presiding over the defamation trial on Thursday, Jones’ “intimate messages” with individuals like Roger Stone receive no protection.

Rolling Stone was first to report that the committee was preparing its request to Bankston for access to the device.

It comes as no surprise that the committee wants to review this data; Jones heavily promoted disinformation about the 2020 election and has connections to several Jan. 6-centric figures who have since been charged with crimes like seditious conspiracy, including the head of the extremist Oath Keepers, Elmer Rhodes.

Texts between Jones and Stone could also prove to be a huge boon for the committee because Stone has been routinely combative and cagey with the committee, calling it a “witch hunt” and invoking his Fifth Amendment right to every question asked of him during his deposition last year.

Jones was asked to cooperate by way of subpoena last November as lawmakers sought details about how he helped fundraise for and organize the rally at the Ellipse. Jan. 6 select committee Chairman Bennie Thompson also highlighted in the initial request for his cooperation that Jones made comments suggesting he had intimate knowledge about plans Trump had in place for his rally at the Ellipse.

Jones eventually sat for the committee, but pleaded the Fifth Amendment to over 100 questions.

Jones’ “advocacy of violence,” she said, “played a role on the 6th.”

“We’d like to know more about it,” Lofgren said.

The committee has been after Jones for months for more information about what transpired following former President Donald Trump’s Dec. 19, 2020 tweet where he proclaimed online that a rally in D.C. would be held on Jan. 6, and that it would be “wild.”

Jones went on his show that same day and highlighted Trump’s tweet while emphasizing the importance of the rally. It would be one of the most historic events in American history, Jones said.

As for the fate awaiting him in the Sandy Hook defamation trial, jurors on Thursday had yet to decide whether Jones must pay $150 million in damages to Scarlett Lewis and Neil Heslin, the parents of Jesse Lewis, a first-grader killed in the 2012 mass shooting. He was one of 20 first-graders killed. Six teachers were also killed.

Ten families of Sandy Hook victims sued Jones over four separate lawsuits for defamation. Jurors never even heard those case because Jones was found liable by default after he refused to turn over records long-ordered by the court.

The trial happening now in Austin, Texas, is the first of three expected. Two other trials are expected next month, but that could shift since Jones has filed for bankruptcy. This could potentially put a stop to all other litigation brought against Jones.

Parents of the victims have asked a bankruptcy court to not allow InfoWars to send any money to Jones until the company’s finances have been completely uncovered.

According to Reuters, Jones went on his InfoWars show on Wednesday and declared that the bankruptcy maneuver could “tie up” any judgments against him for years.

AP reports Thursday night that the judge has ordered Jones to pay $4 million in compensatory damages to one of the Sandy hook families. Punitive damages are still to be determined.

As Daily Kos reported on Thursday, other outlets on Friday morning are now re-upping the news about the messages being relinquished to the committee. A spokesperson for the committee did not immediately return a request for comment about how that transfer process might actually work.