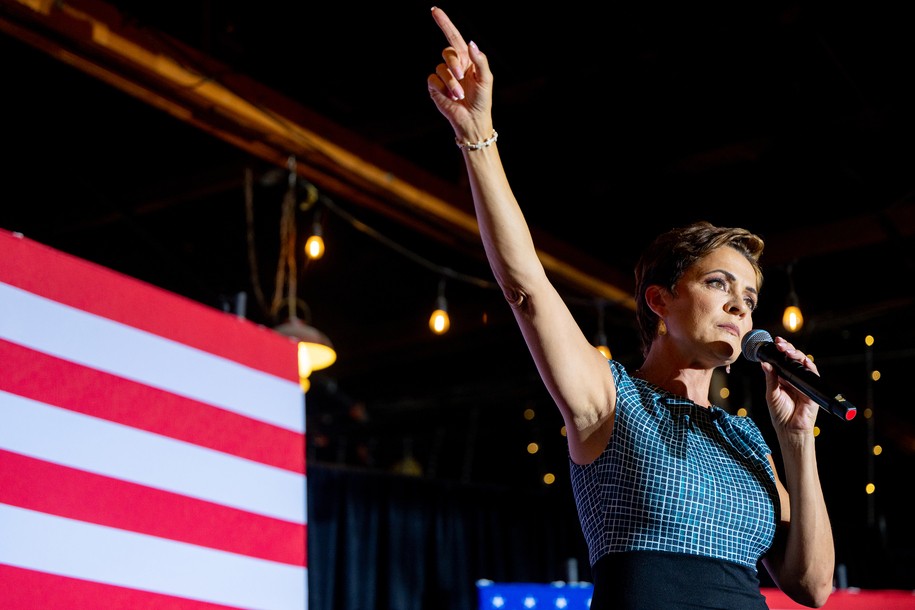 Funny how, when Big Lie politicians like Arizona’s Kari Lake think they might lose an election, they immediately blame it on an unspecified fraud—but when they actually turn out to be victorious, then of course the count is suddenly legitimate and the “fraud” theories evaporate.

That’s how authoritarian Trumpists like Lake operate. When she fell behind on election night by as much as 10 points in early counts in Tuesday’s Arizona gubernatorial primary, she and her conspiracist fanboys immediately suggested that election fraud might be at play. But after the final tallies showed she had won by a three-point margin, she was content to endorse the outcome, while still insisting that “there’s a ton of problems with the system.”

Of course, Lake has never identified any one of these problems that has held up to scrutiny. But facts have never mattered in the alternative universe of Trumpland. After her victory, Lake seemed content to just keep the accusation out there while just moving along, thanks.

“Though the results took longer than they should have, Arizonans who have been forgotten by the establishment just delivered a political earthquake,” she said.

But even though, as Arizona Republic contributor Jon Gabriel notes, “Lake won the GOP nomination much like Joe Biden won Arizona in 2020”—behind early, winning late—the hypocrisy has never been a problem for Trumpists. Unlike in 2020, Lake’s crew has made no demands for recounts and audits:

Lake won, so why challenge the result? But by accepting Tuesday’s results, they’re admitting that our election system isn’t corrupt as they claimed all this time.

Lake thus becomes the third Trump-endorsed GOP 2022 gubernatorial nominee who openly embraces the ex-president’s baldfaced lies about the 2020 election, along with Pennsylvania’s Doug Mastriano and Michigan’s Tudor Dixon. She’s also the fourth Arizona Republican who won on Tuesday to have campaigned on the false “election fraud” claims, including Senate nominee Blake Masters; Mark Finchem, the nominee for secretary of state; and Abraham Hamadeh, who won the GOP nomination for the attorney general’s seat.

The onetime local Fox anchor’s campaign for governor has revolved around the Trump election-fraud claims, with a panoply of other far-right causes included for good measure: anti-masking, anti-COVID health measures, favoring the criminalization of abortion with no exceptions, groundless hysteria about “critical race theory” and pedophilic “grooming.”

Lake says she would support returning to Arizona’s 1901 pre-Roe ban on abortion, which would outlaw the procedure in nearly all cases and criminalize any doctor who conducts it—and she would be happy to enforce it. She’s called abortion the “ultimate sin,” and says she’d sign a “carbon copy” of Texas’ draconian abortion ban, which outlaws the procedure after six weeks.

She’s also been an avid participant in the QAnon-esque hysteria about “child grooming” as an outcome of the LGBTQ community’s activism. Lake joined in the right-wing attacks on drag queens as dangerous to children, labeling them groomers—even though she spent more than two decades attending drag shows and was close friends with a local drag queen.

Lake accused President Biden of promoting a “perverted sexual agenda of grooming our children.” She also called him an “illegitimate president” who is in the pocket of the Chinese Communist government on Twitter:

Why would we let an illegitimate president sell-out our sovereignty to the @WHO??@JoeBiden may be bought & paid for by the CCP, but We the People of Arizona will NEVER give up our Sovereignty. We abide by the US Constitution and the Arizona Constitution. Nice try, Joe

Her taste for far-right activism includes demanding that people burn their masks at one of her rallies. One of Arizona’s most noxious far-right trolls, Ethan Schmidt-Crockett—who spent much of June attacking Pride Month displays at Target store elsewhere—recorded a video with Lake to promote his anti-masking channel.

And she has the authoritarian bully schtick down to a fine science. When she was confronted about the anti-democratic outcome of her hollow “election fraud” claims by NBC News’ Vaughn Hillyard, the exchange went like this:

“At what point does Kari Lake stop and say, ‘Am I undermining Americans’ faith in our elections?’”

“Kari Lake is going to bring back honest elections in America …”

“But you haven’t even laid out any fraud or irregularities.”

“… And unfortunately people like Vaughn are about destroying America.”

If Lake wins the governorship, she has vowed to destroy the state’s current system of elections, and replace it with one far more open to authoritarian manipulation. Among the changes she has proposed are the elimination of mail-in voting in Arizona, as well as eliminating all voting machines.

As the Washington Post observed: “If Lake wins on Tuesday and goes on to take the governorship in this purple state, she has pledged to try to enact election-related policies that could fundamentally upend the way people vote and how their votes are counted. Her stances and comments alarm many current and former election officials and other, more conventional Republicans.”

Perhaps just as concerning is the effect this could have in a national election should it hinge on the outcome of Arizona’s electoral votes. Steve Kornacki notes: “If the GOP ticket prevails in Arizona this year, unhinged conspiracy theorists will hold each of the state’s top three offices—governor, attorney general, and secretary of state—ahead of the 2024 cycle.”

All of those officials are capable of acting on Trump’s claims that state legislatures can overturn election results. Should Lake and Friends get their hands on that power, the ensuing political disaster will spread well beyond Arizona’s borders.