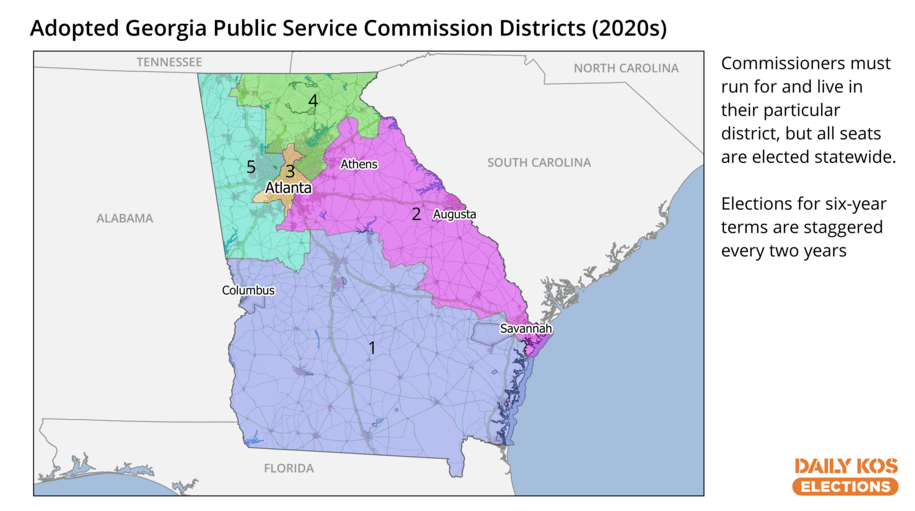 On Friday, a federal district court ruled that Georgia’s system of electing all five members of the Public Service Commission in statewide elections violates the Voting Rights Act by diluting the power of Black voters. The court further blocked officials from holding elections for two seats that were supposed to be on the ballot this fall.

Republican state Attorney General Chris Carr has yet to indicate whether he will appeal, but if the ruling stands, the elections will be postponed until the state’s GOP-controlled legislature enacts a new district-based system next year so that Black voters have a chance to elect their chosen candidates in at least some seats.

Although members of the commission, which regulates public utilities, must seek one of the body’s five districts (and live there), all voters statewide get to vote for every seat. The plaintiffs pointed out that only one Black candidate, Democrat David Burgess in 2000, has ever won an election for the commission in its 143-year history. All five current commissioners are Republicans, none of whom was the favored candidate of Black voters. (The commission’s sole Black member, Fitz Johnson, was appointed by Republican Gov. Brian Kemp in 2021 and wasn’t set to face the voters until this November.)

While adopting district-based elections could empower Black voters if a map is fairly drawn, a switch could backfire if Republican legislators are still allowed to gerrymander the lines. GOP lawmakers enacted new commission districts earlier this year that packed Black voters into just one of the five districts while every other seat was at least 58% white and no more than 36% Black.

Republicans consequently would have carried four districts in every recent statewide election, even those they’ve lost. In fact, Donald Trump would have won a majority of the districts in 2020 by at least 15 points despite losing narrowly overall. It’s not clear why Republicans aggressively gerrymandered the new map since district-level elections were not in the offing until the court’s ruling, but it’s possible GOP leaders anticipated they’d lose this suit.