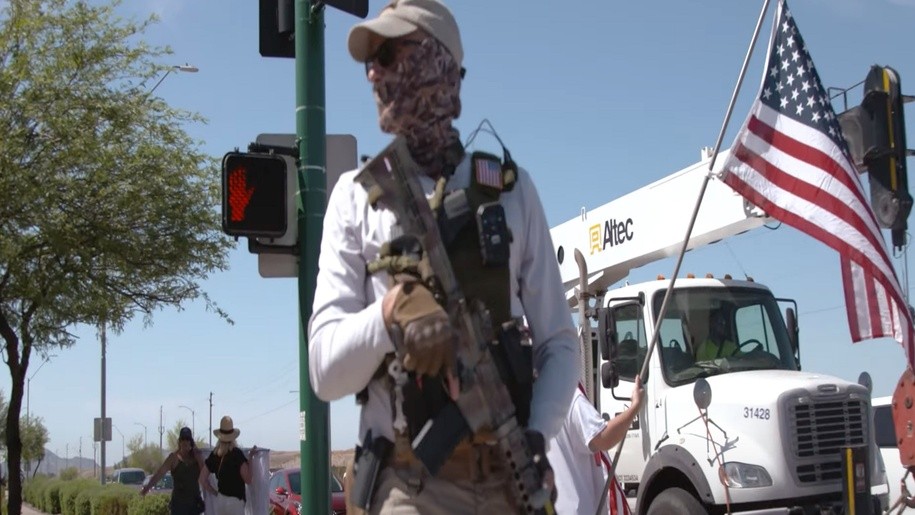 Video captured by the independent media site News2Share shows supporters of former President Donald Trump armed with guns, waving confederate and American flags outside of the FBI office in Phoenix, Arizona on Saturday.

“We’re here in support of Trump, for what happened to him, the unlawful search with the FBI at his Mar-a-Lago home,” someone at the demonstration told News2Share. “We are sick and tired of this tyrannical government called the Biden regime. We will not stand by and we will not stand down.

“We’re gonna take the fight to the FBI if need be.”

The latest in a string of Republican rantings, the demonstration is in response to the FBI executing a search warrant at Trump’s Mar-a-Lago home in Palm Beach, Florida, on Monday—an act that has led to the seizure of 11 sets of classified documents, including those related to nuclear weapons, according to The Washington Post.

Somehow though, Trump apologists still maintain the former president’s rights were violated while they go about the business of threatening the federal judge who signed the warrant and any other official they see fit to accuse without a shred of evidence of widespread election fraud.

In Gillespie County, Texas, a county about 80 miles west of Austin, elections administrator Anissa Herrera said she resigned from her work due in large part to threats she faced, according to the Fredericksburg Standard.

“After the 2020 (election), I was threatened, I’ve been stalked, I’ve been called out on social media,” Herrera told the newspaper. “And it’s just dangerous misinformation.”

Election deniers just got the entire election office of Gillespie county to resign after stalking and death threats. IDK how people there expect to register to vote or conduct fair & legal elections. pic.twitter.com/zIfbn1xHGq

FBI Director Christopher Wray condemned such threats in a statement on Thursday. “Unfounded attacks on the integrity of the FBI erode respect for the rule of law and are a grave disservice to the men and women who sacrifice so much to protect others,” he said. “Violence and threats against law enforcement, including the FBI, are dangerous and should be deeply concerning to all Americans.

They are to Democrats. Many tweeted their outrage at the double standard propagated when a group of white men and women were allowed to threaten federal officials while armed.

Warning: This video contains disturbing footage of violence that may be triggering to viewers.

Phoenix FBI is still trending because the world is witnessing how America’s Law Enforcement has patience for gun toting violent white supremacists, but are quick to murder Black People because they might have a gun and they might point a gun even when they don’t have a gun. pic.twitter.com/AO4WaItUro

A social media user who goes by Jason V. tweeted on Sunday, that the “armed domestic terrorists” probably haven’t been taken down yet “because they’re not black or brown.”

Shannon Watts, founder of the grassroots movement for public safety Moms Demand Action, pointed to a trend of recent violence following GOP reaction to the search of Trump’s home.

The most recent of which is a Capitol Police report that a man started firing in the air then drove his car into a vehicle barricade in a fiery crash early Sunday at East Capitol Street and Second Street.

”When our officers heard the sound of gunfire, they immediately responded and were approaching the man when he shot himself,” Capitol Police said in a news release. “Nobody else was hurt.

No other injuries were reported in the incident, and investigators are still looking into the man’s background. But for many, the incident is an example of violence spiraling out of control as Republicans instigate a greater divide between Trump supporters and the rest of the country.

Early this morning, a man drove into a barricade near the US Capitol, set his car on fire, and started shooting indiscriminately before killing himself. Last week an armed man tried to breech an Ohio FBI building, and last night armed protestors gathered at a Phoenix FBI office. https://t.co/F3sVg7qapu

Regarding the protest outside of the Phoenix FBI building, Democrat Eric Smith tweeted congressional candidates of North Carolina:

RELATED STORY: Here’s a rundown of the double standards between Trump’s domestic terrorism and the BLM movement

Majid Padellan, a blogger and influencer who goes by “Brooklyn Dad” on social media, tweeted on Sunday:

“Not a single Republican leader has called upon the armed trumpers at the Phoenix FBI to stand down. Any blood will be on their hands.”

In another tweet, Padellan laid out a series of actions and statements by Trump that created the kind of climate in which his supporters would feel emboldened to threaten federal officials. “First he told domestic terrorists to ‘Stand back and stand by,’” Padellan said. “Then he refused to call the National Guard on January 6th.

“Then he wouldn’t call off his armed supporters outside the Phoenix FBI. Donald trump is a pathetic, cowardly traitor.”