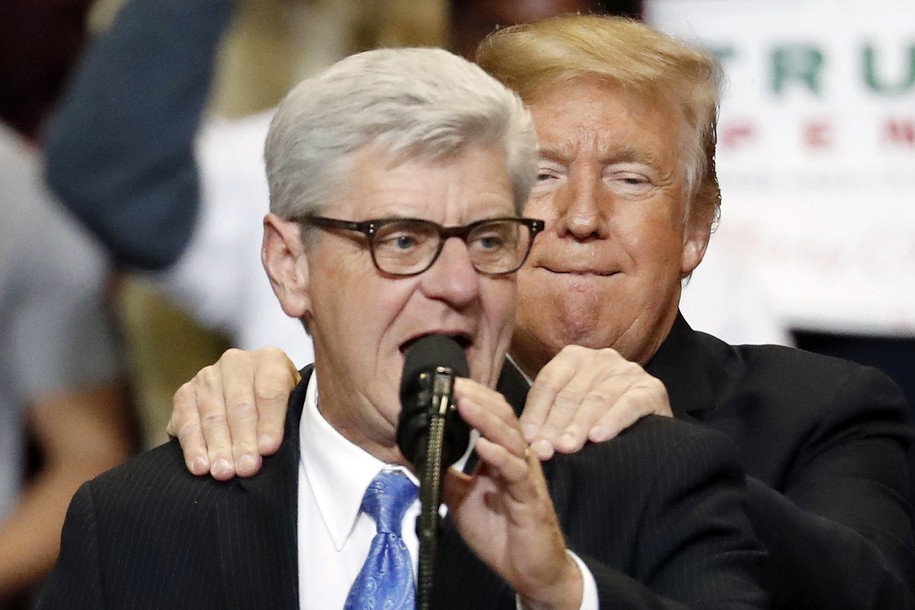 Former Director of the Mississippi Department of Human Services (DHS) John Davis pleaded guilty on Thursday to “multiple federal and state charges relating to the misuse of funds meant for poor families with children.” Davis oversaw a massive fraud of Mississippi’s welfare funds perpetuated by numerous leaders in the Hospitality State. This is one step forward in a multiyear investigation and audit of state resources that revealed the massive welfare fraud scheme, which included tens of millions illegally spent on things like building former NFL quarterback Brett Favre (pronounced “dirtbag”) a volleyball stadium at the University of Southern Mississippi (USM), where his daughter attended and played the sport.

In the court filing, the state explained that Davis’ work is not done after pleading guilty. “The State and Defense have announced that a global plea resolution has been reached between the State, the federal authorities and the Defendant, John Davis, whereby the Defendant, John Davis, has agreed to fully cooperate, including providing truthful testimony at trial, with the State and all federal authorities in the prosecution of any and all additional criminally charged defendants, in State or Federal Court, for the criminal misuse of Federal TANF grant funds, State of Mississippi Funds, Mississippi Community of Education Center funds or any other funds available to or through the Mississippi Department of Human Services during his tenure as the Executive Director of the Mississippi Department of Human Services. The State and the Defense have advised the Court that pursuant to the global plea resolution, all parties have agreed that the Defendant, John Davis will serve all of his incarcerated time in the custody of the Federal Bureau of Prisons.”

The deal sees Davis pleading guilty to five counts of “conspiracy” and 13 counts of “fraud against the government.” The “conspiracy” charge seems to be connected to four unnamed individuals in recently unsealed documents. Who those people are and how much more they might be able to tell state and federal investigators about Bryant’s activities surrounding welfare fraud remain to be seen.

Bryant has tried to plead ignorance of the massive welfare fraud scheme that seems to have been a wealthy and prestigious piggy bank for the wealthy and prestigious in Mississippi. When the first stories began coming out connecting $1.1 million from the state’s welfare fund being paid to Favre for speaking engagements he never actually made, Bryant said he didn’t know nothing about anything. Sure, he put Davis in control of the state’s welfare fund, but like Trump, he only chooses the best people until they are proven to be entirely corrupt—amiright?

In April, texts came out showing Bryant’s private correspondence with Davis. These texts showed how much power and private influence the governor had over the man controlling Mississippi’s $1 billion safety net for low-income folks. Those texts, along with the Republican-driven changes to the program, show exactly how what was supposed to be a fund that went directly to people in need of financial assistance instead began being used to pay off CEOs and presidents of “nonprofits” like Nancy New’s Mississippi Community Education Center, which fostered a relationship with Favre.

The state could have used that money to provide a low-income family with a year’s worth of rent, electricity, child care, diapers, monthly transportation stipends, and nine meals a day – and have done the same for 2,600 more families. The number of people who could have benefitted from this is enough to fill every seat in the new volleyball stadium at the University of Southern Mississippi – which was purchased with welfare funds – eight times.

Recently, texts between Favre and former educational nonprofit head New, as well as New’s correspondence with Bryant, have called into question just how much Bryant knew about the volleyball stadium welfare scheme. Those texts have also implied Bryant was possibly very active in making sure funds went to things they were not supposed to go to. In April, Zach New, Nancy’s son, admitted to working with his mom to fudge a construction project to build a new volleyball stadium at USM and pretend it was a “lease.”

The lease scam was set up in order to get around the fact that it is illegal in the state of Mississippi to use Temporary Assistance for Needy Families (TANF) funds for building and construction. TANF money is supposed to go directly to families in need because of economic hardships. As the Mississippi Free Press reports, “under Davis’ leadership, TANF approval rates for $170 a month in cash assistance were the lowest in the nation, bottoming out at 1.42% in 2017—the year Davis allegedly helped divert $5 million in TANF funds to the volleyball project and $1.1 million to Favre.”

As The New York Times points out, Bryant and Favre are not worrying too much about their dirty stadium deal at this point because ”the volleyball stadium was not actually part of the lawsuit. Last July, after J. Brad Pigott, a former U.S. attorney hired by the state to help recoup the lost millions, began subpoenaing information about what had happened at the university, he was dismissed. Mr. Favre has repaid the state $1.1 million — though the state auditor has said he still owes $228,000 in interest.” He was dismissed by poison water purveyor successor to Bryant, Gov. Tate Reeves.

But Bryant and Favre’s chummy relationship and the influence the two men used to get money out of the state has been relatively well documented. Mississippi Today reported in April on how digital communications between the former quarterback and the governor also included Favre looking for some financial and political help in his attempts to get rich quick by way of a new pharmaceutical company, Prevacus.

“It’s 3rd and long and we need you to make it happen!!” Favre wrote to the governor in late December 2018, according to text messages recently obtained by Mississippi Today.

“I will open a hole,” Bryant responded, piggybacking on the football metaphor.

A week later, Favre reportedly met with welfare officials and somehow got a $1.7 million investment deal in Prevacus. Nancy New also got herself involved and reportedly was able to funnel another $2.15 million into the venture—from the state’s welfare fund. Then, shockingly, Bryant bought stock in Prevacus two days after leaving office. Shock! So shocking that Bryant told Mississippi Today he just didn’t realize that the company has taken public funds and didn’t realize he was going to accept stock in the company. Bryant cut ties with the company a little less than a week after his former buddies were indicted on the conspiracy and fraud charges.

Davis’ guilty plea includes the fact he admitted to diverting money away from the Emergency Food Assistance Program. According to his indictment, he literally stole food from the tables of low-income children from the moment Bryant put him in charge until the moment Bryant had to remove him three years later.

One last important fact: This is the Republican Party’s plan for public assistance programs. Take money that taxpayers earmark for food assistance and housing assistance, use it on paying off the elites in society and people who will go on television to say they are solving the problems while doing nothing but bleeding constituents who pay taxes dry and funneling that money upwards. Don’t believe me? Davis announced his retirement on July 8, 2019. He was retiring because the state’s auditors were very aware that something was deadly rotten under his management. At the same exact time, GOP officials under Trump were salivating over how successful Mississippi corruption was.

On June 19, 2019, Davis informed Bryant he would be testifying in Washington about the state’s food assistance and public safety net programs. The welfare director told Bryant that members of the House Agriculture Committee “like what Mississippi is doing” and wanted to hear about “what we have done to be so successful.”

As for Brett Favre? Former NFL quarterback Sage Rosenfels had this to say on Twitter:

Of course, this is partially because I had already stolen millions from the richest people in our country. https://t.co/pC8YfPAqZ6

Pssst. Want to learn how competitive your House district is? Daily Kos Elections just released a massive new data set that breaks down the results of the 2020 presidential election for every last one of the nation’s new congressional districts, so we’re dissecting what it all means on The Downballot with longtime DKE writer Stephen Wolf. Wolf explains why these numbers closely predict the outcome of most House elections, how they show the way in which the overall playing field has grown even more tilted toward Republicans, what the most evenly divided district in the country is, and much more.