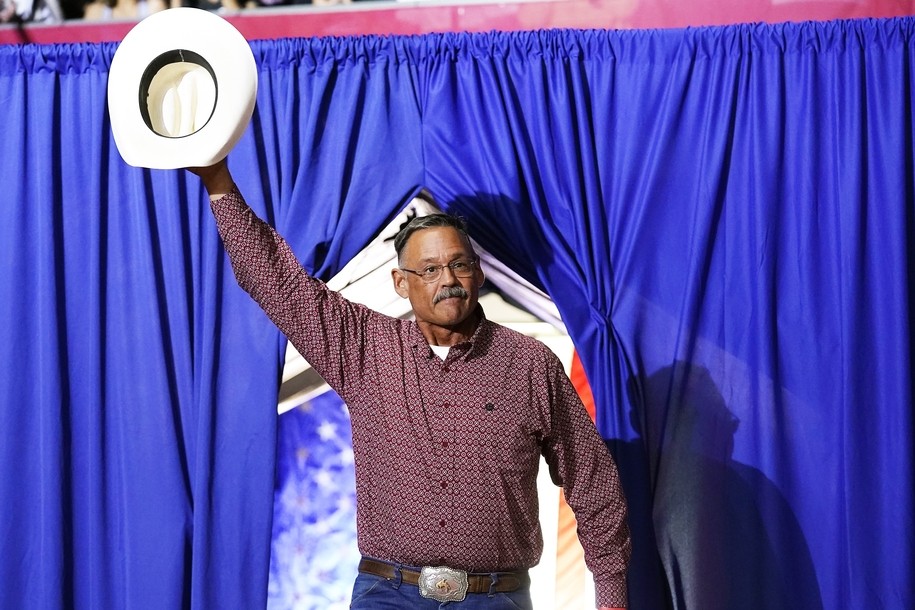 Mark Finchem is running for secretary of state in Arizona. He’s been open about being at the U.S. Capitol on Jan. 6 and vocal that the 2020 election was rigged and former President Donald Trump’s seat was stolen by Joe Biden. What he hasn’t said, at least in public, is that he’s been interviewed as a witness by the Department of Justice (DOJ) and the House panel investigating the insurrection. He let that tidbit slip in a debate against his Democratic opponent, Adrian Fontes, on Thursday. Oops.

“I was interviewed by the DOJ and the J-6 commission as a witness,” Finchem said. “So for him to assert that I was part of a criminal uprising is absurd. And frankly, it is a lie.” After the debate, the four-term, far-right lawmaker told reporters the interview took place “a couple of months ago,” ABC News reports.

AZ Central reports that until last night’s debate, it was only publicly known that Finchem was subpoenaed by the Select Committee to Investigate the Jan. 6 Attack on the U.S. Capitol. That the DOJ is involved with his case is new information.

When Finchem was asked by moderator Ted Simons who won the 2020 presidential election, the Trump-endorsed candidate went down an Alice in Wonderland rabbit hole of conspiracies, alleging that the state was “irredeemably compromised” in counties such as Maricopa, Pima, and Yuma, the AZ Central reports.

Finchem’s opponent, who oversaw the 2020 elections in the state, responded with, “What we now have is an entire set of fiction that has somehow managed to make a lot of money for some people outside of the regular norms that we expect. […] This is a chaotic way of redressing a political loss.”

According to AZ Central, the two candidates also sparred on the issue of early voting. Of course, Finchem believes the system is rigged and rife with fraud, while Fontes believes his opponent simply wants voters to stand in long lines on Election Day.

As Daily Kos reported Wednesday, not only does Finchem hold bizarre views on elections, but he is also fully supported by a cast of even stranger characters.

Former actress and current massage therapist and entrenched 9/11 “truther” Nicole Nogrady, 39, is the woman behind the Finchem event Sunday. The Daily Beast reports that Nogrady just last week alleged on social media that 9/11 was an inside job: “The same people who orchestrated the [Sept. 11] event have been working hard behind the scenes to create their desired ‘One World Gov’t’ and have made us divided more than EVER before,” Nogrady wrote, going on to call 9/11 “the day the Deep State took thousands of lives.”

It seems redundant to say this, but Finchem, a proud member of the Oath Keepers group, is also a vocal antisemite.

According to AZ Central, the candidate has threatened that if Arizonans don’t vote for him, then Jews will run the government. Finchem thinks his opposition is financed by Jewish donors. He accuses anyone who disagrees with him of being a loyalist “to George Soros and Mike Bloomberg,” both of whom are Jewish and, in recent years, have been increasingly tied through conspiracists’ unfounded claims to all manner of violence and alleged political secrecy.

“Democrat politicians on the ballot in Arizona are liars and deceivers. They want total control over you and our state. Their loyalty is to George Soros and Mike Bloomberg. They want Arizona to be like California. Do not be deceived.”

Democrat politicians on the ballot in Arizona are liars and deceivers. They want total control over you and our state. Their loyalty is to George Soros and Mike Bloomberg. They want Arizona to be like California. Do not be deceived.