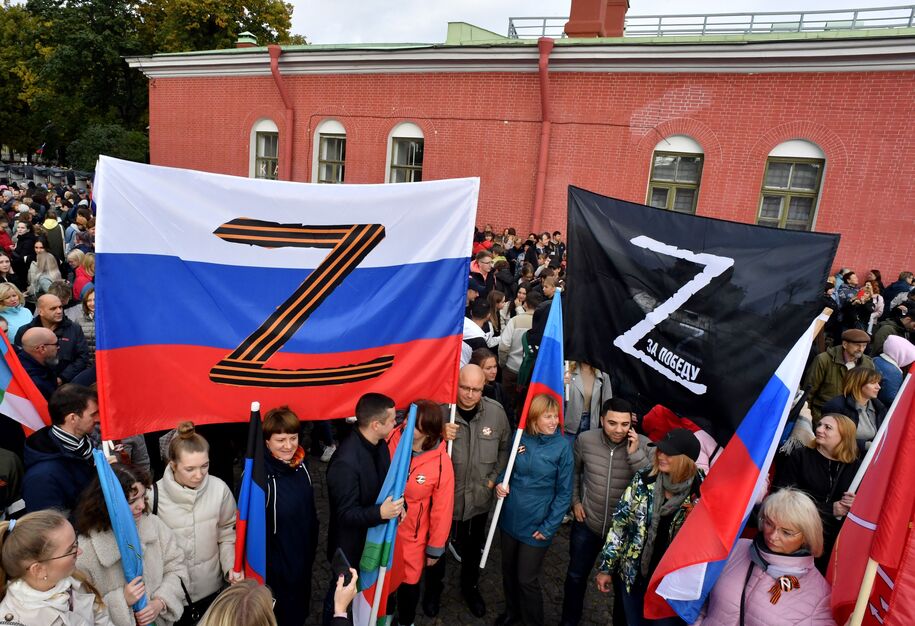 Make no mistake about it, that Vladimir Putin had to go on television in Russia and announce any sort of mobilization at all is a huge admission of failure. Putin launched his illegal, unprovoked invasion of Ukraine with the real expectation that he would be touring around Kyiv within the week. He expected Ukrainian forces to surrender en masse. He expected President Volodymyr Zelenskyy to take the first flight out of the country. He expected to install Viktor Medvedchuk as the leader of a puppet government while they planned, with plenty of pomp and ceremony, the reinstitution of the Soviet Union with Ukraine as a client state.

Russian troops in that media-hyped “40-kilometer caravan” heading down the road from Belarus to the outskirts of Kyiv didn’t bring along their dress uniforms just for the hell of it. They expected to don those uniforms, take a victory stroll, and raise a Russian flag right in the middle of Independence Square.

The last thing any of them expected was that Ukraine would fight. That Zelenskyy would stay. That the only time those dress uniforms would be seen was when they were removed from the shells of destroyed tanks. And none of them expected that the Russian military would prove to be so utterly ineffective in an actual fight against even a modestly competent opponent.

Russia’s withdrawal from the area around Kyiv was a crushing defeat that signaled an end for Putin’s big dream of Soviet Union 2.0. But rather than just drag their troops home, Russia took the survivors of the Battle of Kyiv and shoved them into the areas where they had met with some success: the Donbas and the coastal south. It’s no coincidence that the Izyum salient grew as Russia pulled its forces from area around Kyiv, Sumy, and Chernihiv. The capture of the entire Donbas became Putin’s widely announced consolation prize. Russia may not take Kyiv, but by Stalin, with all the force of the Russian military, they could take two states in eastern Ukraine; states where they had occupied half the territory since 2014.

Only they could not. For the last seven months, Russia’s “professional military,” aided by mercenaries from the Wagner Group and the sadistic Chechen TikTok brigade, have tried to take that one little area, an area that is smaller than the city limits of New York. What they’ve managed to do instead is  to lose over 50,000 men, more than 2,000 tanks, and 100% of their reputation as an effective fighting force.

Putin invaded Ukraine seeking to destroy an army. And he did. Only it was Russia’s army.

With multiple reports that Battalion Tactical Groups are operating with fewer than half the troops they should have, that maintenance crews and support staff have been turned into front-line forces, and that even then many of these units have trouble scraping up 60 men for infantry, someone finally had to tell Putin that unless they did something, the counteroffensive that swept away Russian gains in Kharkiv was going to be the counteroffensive that pushed Russia back to the border.

Back in March, independent journalist Kamil Galeev wrote a lengthy thread showing just why the Russian army couldn’t perform in the field, and why “the world’s second strongest army” was turning out to be the second-strongest army in Ukraine. In large part, that’s because the Russian military is a trash heap. Members of the military aren’t considered heroes in modern Russia. Mobsters and oligarchs are heroes. Soldiers are suckers, the poorest of the poor, almost universally from ethnic minorities and outlying regions that Muscovites look down as with pure disdain. They’ve given almost no training, have their best equipment stolen before it can ever be used, and get treated in a way that makes “cannon fodder” seem like a compliment. Overall they are viewed as people whose greatest contribution to society comes when they die and reward their families with a cash payout.

If you want, you can dig further into how harassed, how abused and how low in hierarchy the Russian military are. Of course the lowest position ever is taken by conscripts. There are many publications on how conscripts were forced into gay prostitution to earn cash for higher ups pic.twitter.com/VTi2m5qcE8

Putin had resisted calling for mobilization, because he knew exactly what that meant. It meant that while Russians were perfectly willing to make happy noises about how Putin used his army of contract soldiers that the average Russian sees as a pathetic pile of misfits constantly bullied by Russia’s criminal-based upper class, they would not make happy sounds if they had to actually put an inch of skin in the game.

Back in May, a poll showed that poor Russians—those most likely to have relatives in the military—were, unsurprisingly, the ones most likely to be against the invasion of Ukraine. A majority of Russians who had trouble putting food on the table were either hesitant about continuing the war or straight-up wanted to withdraw from Ukraine. At the other end of the scale, wealthy Russians were hugely in favor of watching poor people get slaughtered for sport.

For decades, Putin has been able to simply proclaim “Russia Stronk!” as he sent his patchwork army to blow up buildings and stumble over the rubble. But as it turns out, Russia not so stronk. And now people—people not so poor that they joined a miserable, bullied military—are finding themselves rounded up and sent off to die with the same Soviet-era tanks, same moth-eaten clothing, same spoiled rations, and same nonexistent training as the rest of Putin’s deadenders.

The announcement of “partial mobilization” has already generated a sell-out on airline tickets out of Moscow, long lines at the few available border crossings, and protests in major cities. But what’s becoming clear as each hour passes is that there’s nothing “partial” about this mobilization for most of Russia. Putin’s claim that this would affect only members of the reserves, and then only those with prior combat experience, is simply another lie.

University classes are already being hauled off as a group. Protestors become instant conscripts. Circulating lists of names suggest that over 1 million people are already facing conscription. As always, the location of those names is far from equitable. The numbers in major cities in the western part of Russia may be relatively small. The numbers in the east are simply overwhelming.

Vladimir Putin crashed the Russian army on the rocks of Ukraine. What’s left if it is a wreck tottering on the edge of total destruction. The situation is so bad that Putin has turned to what is legitimately a last-ditch effort to patch the holes and try to keep things afloat long enough to … to …

And that’s the real kicker. Putin will hold his mock elections. He will proclaim parts of Ukraine to be parts of Russia. But he will never get to keep them. Still, maybe he will get a little ethnic cleansing done and call that victory.

Maybe it’s time for another poll on just how much Russians love this war.

If some of those Russian captives seemed well-scrubbed and healthy coming home this week, here’s a better clue about how they were treated.

Ukrainian soldier Mykhailo Dianov – to the left; during the siege of Azovstal and to the right; after Russian captivity. pic.twitter.com/hEvnoNiJ4b

An powerful message from the former president of Mongolia @elbegdorj blasting Russia for using ethnic minorities as cannon fodder, says no dictatorship lasts forever. I don’t know if any Mongolian leader (former or present) of this stature has ever criticized Russia so harshly. pic.twitter.com/tidAtONrNq